Savings Through Submetering and LED Lighting 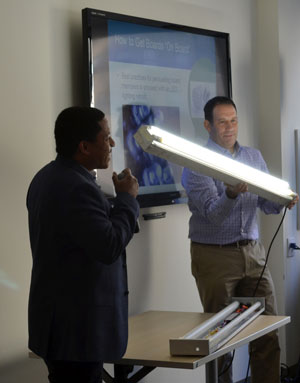 Recognizing that boards may initially be wary of green initiatives fearing high imple­mentation costs, Senior Property Manager Aubrey Phillibert offered advice. “By pro­viding validated financial projections that clearly show the impact a project will have on future operating expenses, this percep­tion can be overcome.”

Phillibert used that strategy to encourage a board to install electric submeters in a complex that had over 1,000 apartments. Since implemented in 2011, electricity use has plummeted by 1.1 million kWh and sav­ings are near $500,000.

Phillibert also discussed his tactics for urging boards to implement LED lighting retrofits. Having initiated several LED proj­ects, he has found boards’ initial concerns generally the same: skepticism of aesthet­ics, bulb color, and projected cost savings. “After simplifying the project, providing bulb demonstrations, and supplying data to support projected expense and usage reductions, it’s difficult for a board to deny the project,” he said.

Property Manager Rovena Haxhiaj shared lessons learned from overseeing a complex heating and cooling project which entailed replacing two dual fuel boilers/burners and two gas absorption chillers, as well as installing a cogeneration or combined heat and power (CHP) system. While the board was planning to replace the equipment— which was running inefficiently and had passed its useful life—the idea to incorpo­rate CHP was ignited when the board pres­ident attended a presentation at FirstSer­vice Residential’s 2013 Sustainability Expo.

Haxhiaj also shared creative ways she achieved unit owner buy in for CHP, such as playing a video loop in the lobby showing case studies from similar buildings.

In the end, the decision to add CHP to the project mix resulted in: Below: Victor Berrios executed an array of sustainable projects at Jaime Towers. 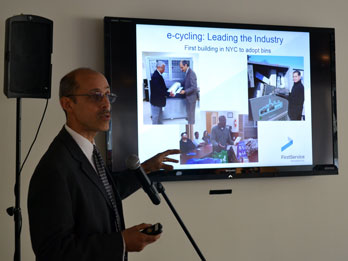 When considering energy efficiency proj­ects, she urged her peers to tap the knowl­edge of FirstService Energy—especially with regard to obtaining NYSERDA and Con Edison incentives—which for this project totaled over $700,000.

The Greening of Jamie Towers

General Manager Vic­tor Berrios outlined the array of sustain­able achievements he has executed at Jaime Towers, a four build­ing, 620-unit complex. Early on he enlisted the city’s Bureau of Waste Prevention, Reuse and Recycling to implement initiatives aimed at proper recycling—from “chute room makeovers” containing proper sig­nage and bins to work­shops for maintenance staff and residents.

The complex was among the first to offer re-fashionNYC textile recycling bins and the first to add e-cycleNYC bins. Efforts that began with “just one phone call” have con­tributed to recovering a veritable mountain of material for a second life.

Each success fueled Berrios’ pursuit for more. Soon, exterior lights across the com­plex’s 12 acres were replaced with LED lighting. Staff turned Christmas trees into mulch to nurture the complex’s flower beds. Instead of discarding countless bags of leaves into dumpsters, he salvaged them as compost for a local garden.

A conversion to replace #6 oil with natural gas is underway which is projected to save $350,000 per year in heating costs. In ad­dition, the board voted to install two CHP units. Up next: the installation of a water well to provide an economical solution for filling the complex’s pool.

Bureau of Recycling and Sustainability Can Help 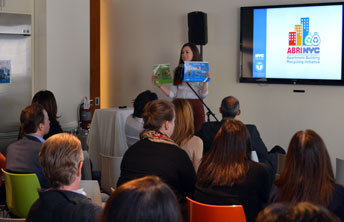 Jessica Schreiber from the Department of Sanitation’s Bureau of Recycling and Sus­tainability addressed how properties can benefit from the city’s recycling, composting and waste prevention programs, covering: Schreiber, who has participated in our pre­vious Sustainability Expos and recently conducted an e-cycleNYC training for man­agers, lauded FirstService Residential as “one of New York City’s greenest property management companies.”
Friday June 05, 2015
Also of Interest